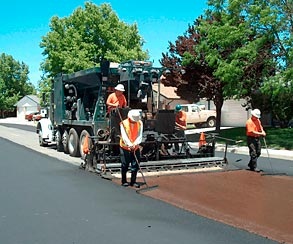 What:  A mixture of emulsified asphalt, fine aggregate, mineral filler, water and additives is proportioned and mixed on site using special equipment.  The slurry is uniformly spread in a very thin layer (as thick as the largest aggregate) with a spreader box over a properly prepared surface.  Some slurry seals may be made with polymer modified asphalt emulsions and/or have crumb rubber additives.  The pavement preservation treatment results in a black surface that protects and prolongs the life of good pavements and corrects low severity surface defects.  Slurry seals are available in three types, depending upon the average size of the aggregate.  Generally, Type I is used to seal surface cracks on low-volume roadways; Type II (the most common) is used to correct raveling and oxidation on roadways with moderate to heavy traffic levels; and Type III is used to fill minor surface irregularities and restore surface friction.  The typical application rate for Type III is 15–30 lbs/yd2.

Where:  Slurry seals are appropriate for aging asphalt pavements in good structural condition with only minor cracks and/or raveling, or where there has been a loss of skid resistance.  They may be used on freeways, residential streets, parking lots, airports, bike paths, driveways and any area that needs the pavement to be preserved.  They also serve to delineate pavements, and can be combined with a chip seal to make a cape seal.

Why (advantages):  The treatment seals and waterproofs the surface, fills minor cracks, restores skid resistance and restores aesthetic appeal with a black surface, all at a relatively low cost.  The slurry surface is smoother than a chip seal, therefore friendlier for bikes, rollerblades and skateboards.  Slurry seals extend the life of existing pavements by protecting the undersurface from the effects of aging and the environment.

Why not (disadvantages):  Slurry seals cure primarily through water evaporation, so they should not be placed in thicker lifts than recommended.  Traffic should not be reintroduced until the seal has thoroughly cured, which may take 2 to 8 hours depending upon the climate.  Slurry seals are not appropriate for pavements with rutting (more than ¼”) or high severity surface distresses.  Mixing equipment is needed onsite to accurately combine the components, and for all road applications a special slurry truck is needed to mix and apply the slurry.  When placed over severe cracks, conventional slurry seals (those without polymers) are subject to reflective cracking, so any cracks greater than 1/8” should be sealed before slurry seal application.

When:  Slurry seals are recommended when the primary deterioration is related to oxidation and hardening of the existing asphalt.  Slurry seals are most effective on pavements with only very minor cracking (less than 1/8”) or raveling.

For more information on successful slurry seals, consult the Slurry Seal Checklist put together by the Foundation and FHWA.