History of FP2 on Occasion of 2017 Silver Anniversary

In 2017 FP2 Inc. celebrated the 25th anniversary of its founding, and as we anticipate the future, it’s good to take a look back to see how we developed over two and a half decades. 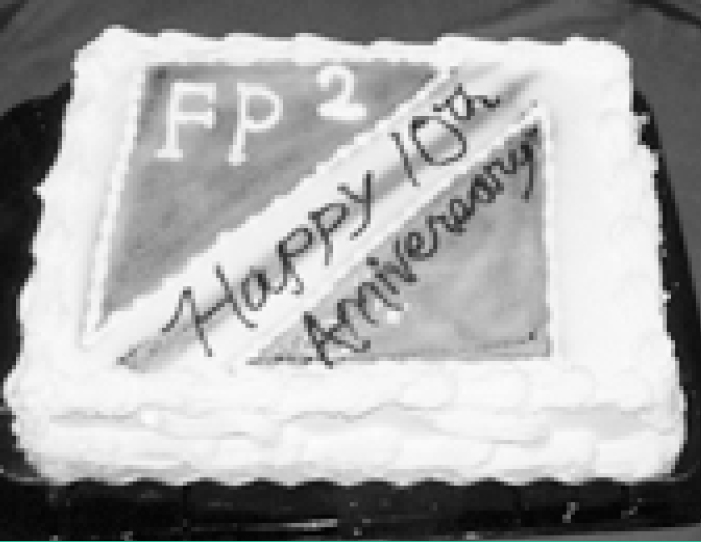 In 2002, the board of directors celebrated FP2‘s first decade with a sheet cake

Established in 1992 as the Foundation for Pavement Rehabilitation and Maintenance Research (FPRMR), FP2 is committed to the advancement of pavement preservation practice. To better serve its publics, in July 1999 FPRMR underwent a name change to FP2 Inc.

In 2009 FP2 underwent another change, to an advocacy institution. Today, FP2 Inc. is supported by the pavement preservation industry, contractors, material suppliers and equipment manufacturers, as a non-profit trade association organized under the Internal Revenue Code Section 501(c)6.

A major mission of FP2 Inc. is to educate elected officials — and to support legislative efforts — regarding the benefits of pavement preservation. It also seeks to enhance FHWA and state DOT abilities to fund these programs at the national and state levels.

Inside the Beltway – with the support of Alignment Government Strategies, FP2‘s professional legislative counsel – FP2 Inc. labored to make sure pavement preservation was eligible for federal funding in 2012’s MAP-21 national surface transportation program, and in its 2015 successor, the FAST Act.

This research at NCAT and MnROAD is underwritten by FP2 Inc. and its funding partners from state DOTs, and began in Alabama late in 2012, and expanded to Minnesota in 2015.

And FP2 Inc. continues its sponsorship of the James B. Sorenson Award for Excellence in Pavement Preservation. Jim Sorenson (1949-2009) was senior construction and system preservation engineer, FHWA Office of Asset Management, and he was a great champion of pavement preservation at the national level. 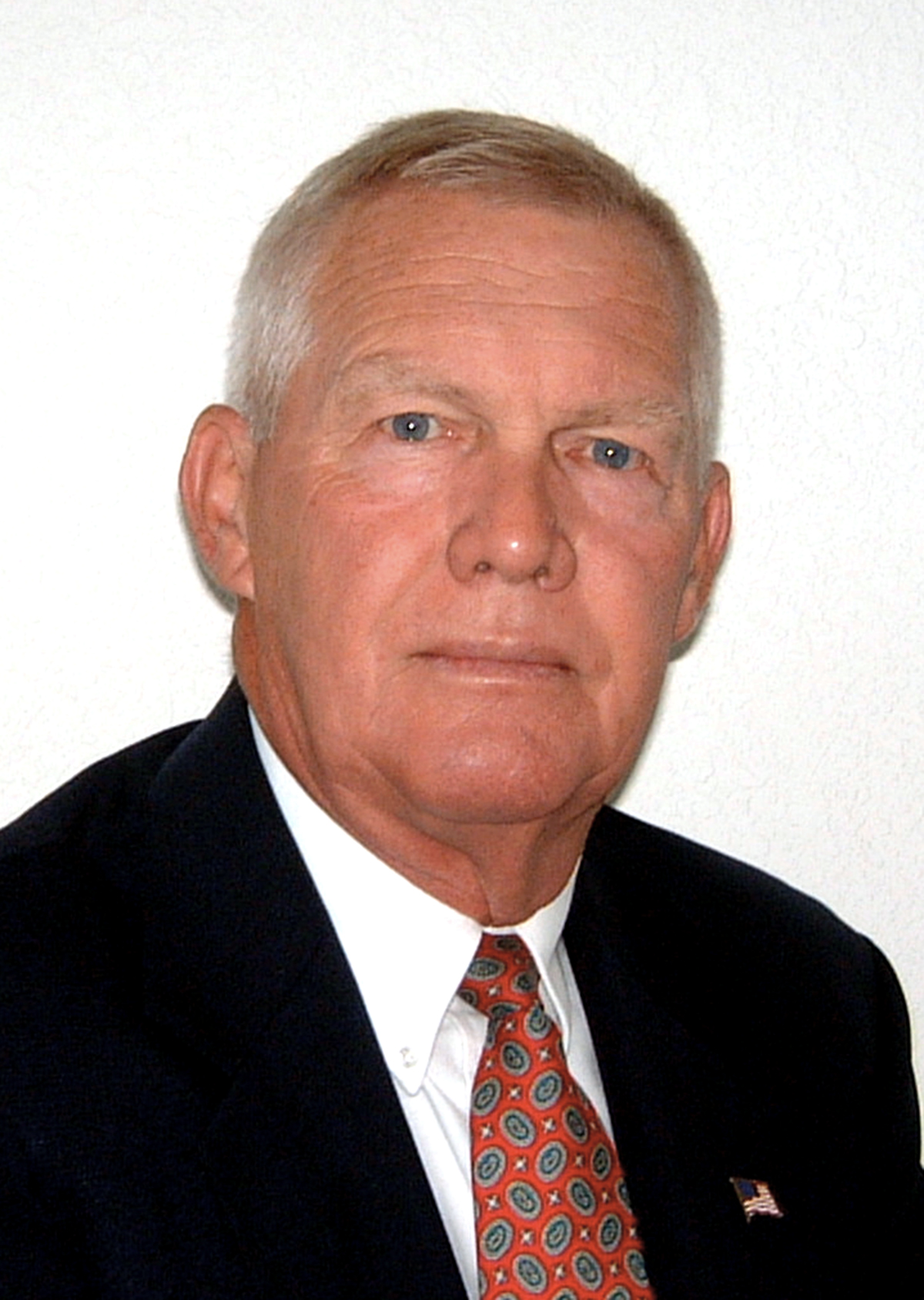 FPRMR was launched by ISSA. Before FPRMR, research in pavement maintenance on a national level, prior to the Strategic Highway Research Program, was funded periodically by entities such as American Association of State Highway and Transportation Officials through the National Cooperative Highway Research Program, NCHRP, and the FHWA, recalls current FP2 executive director Jim Moulthrop.

State DOTs, of course, funded projects dealing with crack sealing and pothole patching that suited their materials and environment, but there was no real national effort, he says.

The notion that an industry trade association like International Slurry Seal Association, later the International Slurry Surfacing Association, could launch a successful organizational effort in 1992 was certainly visionary, Moulthrop says, yet the Foundation for Pavement Rehabilitation and Maintenance Research (FPRMR) was organized as a 501(C)3 non-profit public charity by the ISSA.

Two-time FP2 president Mike Buckingham, a leading contractor in pavement preservation, recalls how the concept for FPRMR started with ISSA.

“In 1991 the president of ISSA was Bob Province, and I was on the board,” Buckingham says. “I was appointed to a special committee to find some ways to raise money for research. I had imagined silent auctions and such at events, but at a meeting the idea of a foundation to which people could make tax deductible contributions came up. At sometime prior to the ISSA convention in the Canary Islands the idea was voted on and approved by the ISSA board, and we had our first informal, organizational meeting at that ISSA meeting.”

Buckingham went to AEMA and ARRA to promote FPRMR. The name FPRMR itself was intended to attract interest in those organizations, he says.

“At the very beginning I  told ISSA that they have just given birth to something that will someday be more important that themselves,” he says. “The work that FP2 has done has been more than any of the groups alone or together could have done on a national level and with politics.” 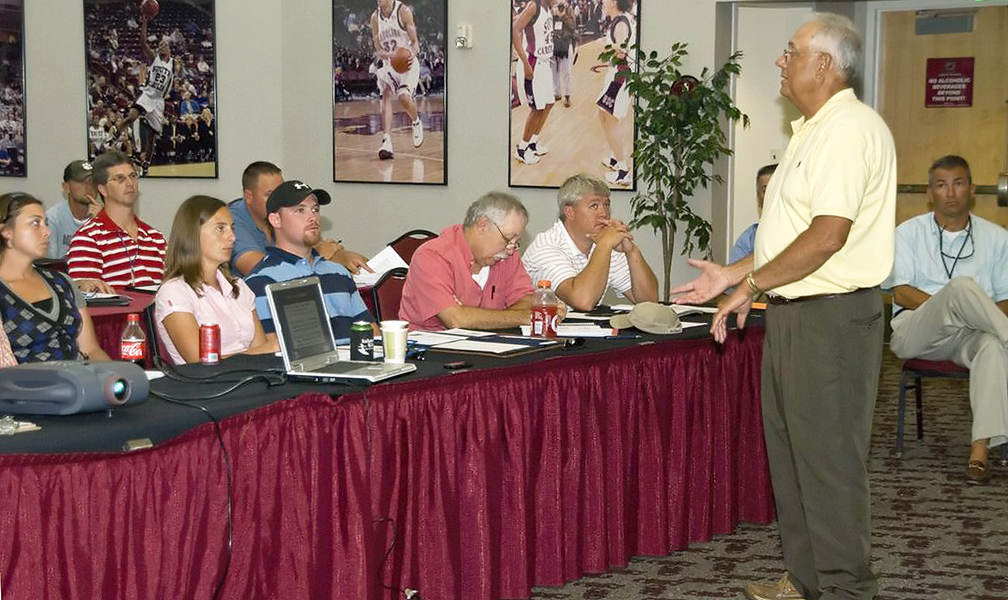 FPRMR’s movement to FP2 took place under Bill Ballou as president, but before then Ballou was instrumental in building support for the nascent organization.

“Our vision is to provide the funding, research, and skills to see that pavement preservation is done correctly while creating an informed infrastructure on pavement preservation for public and industry,” said Bill Ballou in 2000, then with Koch Pavement Solutions, and that year president of FP2.

Ballou’s earliest recollection of FPRMR’s start was an early-1990s meeting with him, Buckingham,  Jim Moulthrop, and FHWA’s Gerry Eller and Jim Sorenson. “We met to discuss the prospects for a group that could begin selling pavement preservation, general maintenance and of course, how to do it. We needed support, direction, leadership and ability to educate people in various units across the country including FHWA, state DOTs, and local governments like counties.”

Getting the private and public sectors together was critical, Ballou recalls. “One of the first obstacles was getting contractors, educators and associations, like ISSA, AEMA, ARRA involved in government groups in which they’d not previously been involved, or even invited to attend,” Ballou says. “Eller and Moulthrop were instrumental in getting us involved with the states via AASHTO, where we began to describe plans for pavement preservation for their member DOTs. We got a great reception and made many presentations. Michigan DOT, Caltrans, Kansas DOT, PennDOT, and Iowa DOT were already trying to upgrade their preservation and maintenance programs, so what we were doing fit with their thinking.”

From the very beginning, to make the concept work, common cause had to be found among the many methods of preservation. “Joining recycling, repaving and emulsion treatments with crack seals and other preservation activities was a struggle, because each thought these other systems were competition,” Ballou says. “We had to let them know that all these treatments should be a part of an overall program. It took some time and some bruised egos to get this across. The same was true with hot asphalt mix suppliers and contractors, who felt they were in competition with preservation for limited dollars.” 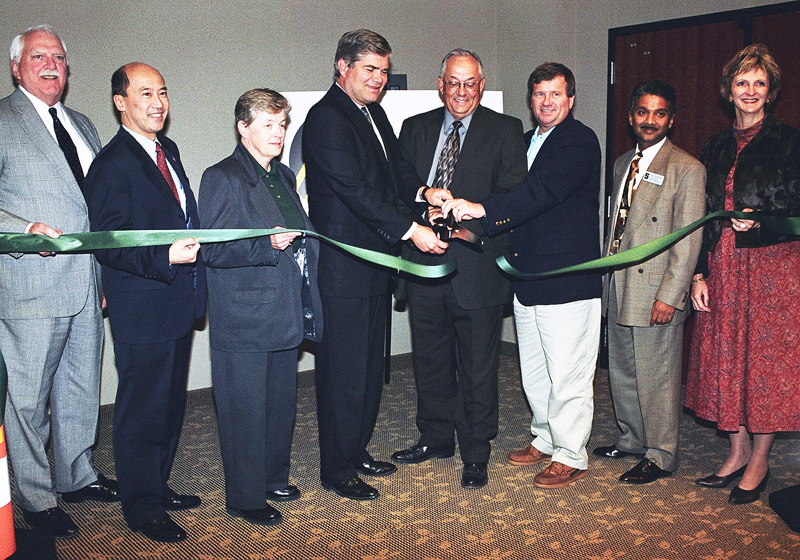 AASHTO officials understood this well and worked with these groups to change thinking, Ballou says. “In some cases, it took new administrations and retirements for change to start,” he says. “Eventually, we got to the concrete industry, when we began to break ice with diamond grinding, crack sealing, concrete patching and dowel retrofit processes that are all part of a total PCC maintenance program for most states.”

In these early days, Jim Sorenson was a major champion for preservation at FHWA. “Sorenson was a giant in terms of breaking FHWA centers’ habits of sitting and doing nothing,” Ballou recalls. “He was always on them. Soon we began to get FHWA people out to our jobs so they could educate themselves. I have many great memories of meeting new people and sharing what was happening in pavement preservation across the United States.”

About 1999-2000, at the turn of the new Millennium, the foundation found it difficult to explain the cumbersome acronym of FPRMR, and elected to simply re-name the organization the Foundation for Pavement Preservation, Moulthrop says. At that time, in 2000, FP2 began to publish a quarterly newsletter, Pavement Preservation Today.

About the same time, Ballou served as president until he left employment with Koch Materials. During this time, several board members, having knowledge that Larry Galehouse was going to retire from the Michigan DOT, began to consider the development of a National Center for Pavement Preservation at Michigan State University.

“A small group met at O’Hare airport in Chicago to discuss and formulate a plan,” Moulthrop says. “This was presented to the board and after some negotiations, the board agreed to enter a contractual arrangement with the university which required the foundation to provide $50,000 annually in support of the center, and which continues today.”

After Ballou, Bill O’Leary of Prime Materials was elected president and served in that capacity until 2009. The board also decided to move on from being administered by an association management firm, and opted to being run by an executive director. Gerry Eller, recently retired from FHWA, was the first FP2 executive director.

In Fall 2000, during O’Leary’s presidency, the foundation, as it continued to be known, launched the very popular Pavement Preservation Journal, the only trade publication devoted entirely to pavement preservation. 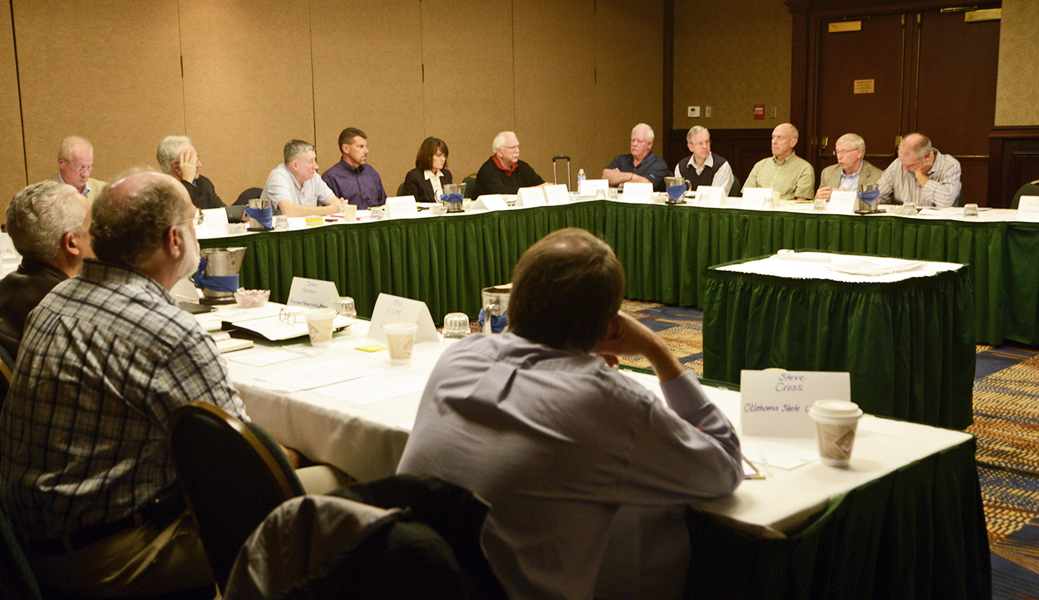 Soon a new mission for FP2 was developed which highlighted three fundamental activities: advocacy, research and communications. In addition, upon the advice of counsel, the Foundation for Pavement Preservation was decommissioned and re-incorporated simply as FP2 Inc.

At a board meeting in early 2009, after much discussion about the purpose and direction of the foundation, the board decided to re-organize as a 501(C)6 non-profit trade association. Among other changes, the board selected Mike Buckingham as president — his second time in that post — and appointed Moulthrop as executive director.

To that end, a discussion was held inside the Annapolis Yacht Club during the annual June meeting between the three associations that was used to map out future plans, and plan the upcoming annual meeting.

“The topic turned to the foundation and its future,” says long-time ARRA member and FP2 supporter John Rathbun.  “My memory is that associations’ executive director Mike Krissoff started the discussion by stating that the foundation had accomplished its goal of making the words pavement preservation part of the language and culture of the industry, and he asked the question, ‘what’s next?'”

Inside that room were many of the leaders of the preservation and recycling industry, among them Baxter Burns, Mike Buckingham, Bob Koleas, Barry Dunn, Mike Polak, Jim Moulthrop, and counsel David Baker, along with a host of others, Rathbun recalls.

“It didn’t take long for a consensus to emerge that the No. 1 issue facing all three groups was legislation that could make or break our small and fledgling industry,” he says. “In a matter of several minutes a consensus emerged that if we were to make an impact we had to take our message to Capitol Hill.

“That day it was also realized that this step, while vital, would not be inexpensive, he says. “The foundation’s charter would have to be changed, representation on Capitol Hill would have to be retained, and a host of organizational issues would have to be identified and solved.”

Also on that day financial pledges from many of those men and their companies in that room began to be formalized and a plan of action was outlined that could be put in place by the fall semi-annual meetings that year.

“As I look back on that day it is still the proudest memory I have of my association with all three groups,” Rathbun says. “That was the day that competitive industry instincts were set aside and a unified industry, in the form of today’s foundation, was born. I’ll never forget it and am grateful to have been a small part of it these last 25 years.”

And to fulfill its mission in research, in 2012 FP2 elected to be a full funding partner in the preservation group experiment conducted at the National Center for Asphalt Technology, and continues to be involved in the 2015 expanded study with NCAT and MnROAD.