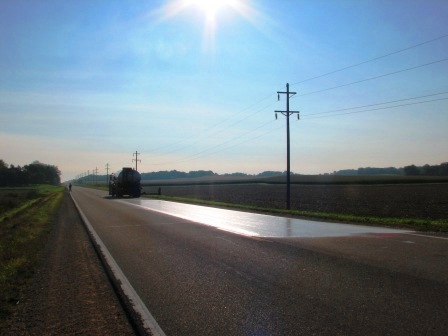 What: A light spray (typically 0.05 to 0.15 gal/yd2) of a diluted asphalt or rejuvenator emulsion is applied by a distributor truck.  By renewing the surface asphalt, it delays further oxidation, weathering and raveling.  It seals micro-cracks and is a very low cost and effective pavement preservation treatment when applied correctly on pavements in good condition.  Rejuvenating fog seals are used to specifically alter the chemistry of the asphalt on the surface.  Typically, they include oily fractions developed to restore the viscoelasticity of oxidized, hardened asphalt.  There are some commercial fog seal products that do not need dilution, but the manufacturer’s recommendations should be followed.

Where: Fog seals should be used on good condition, structurally sound asphalt pavements.  Fog seals are also effective on newly constructed chip seals to aid chip retention and to give a black, aesthetically pleasing surface.  They can also add 2 to 3 years to the life of aging chip seals if applied before there is too much aggregate loss.  They are also very effective for shoulder preservation.  They should not be used on pavements with moderately or severely distressed surfaces, pavements with poor skid resistance or rutting, or roads that cannot be closed to traffic during the curing period.  Rejuvenating seals should only be used where the surface asphalt has hardened, and care should be taken to prevent loss of skid resistance.

Why (advantages): Fog seals are very low cost, are easily applied, replace asphalt that has worn off surfaces, reduce raveling, waterproof surface, rejuvenate and protect surface from UV aging, seal micro-cracks before they have a chance to widen and protect pavement structure from moisture intrusion.

Why not (disadvantages): Fog seals may initially reduce skid resistance, especially when applied too heavily.  Fog seals may be sanded to reduce friction loss.  The lane should be closed to traffic until the seal has completely cured, which can take several hours.  The lifespan is less than some other surface treatments.

When: Fog seals should be placed on asphalt pavements before they show signs of surface distress, or immediately after chip seal construction.  A regularly scheduled fog seal program every 1-5 years (depending upon the road’s surface) will keep a good road in good condition.  Fog seals should be applied in dry weather, when the temperatures are warm enough to ensure a complete cure.

For more information, consult the Fog Seal Checklist put together by the FP2 and FHWA