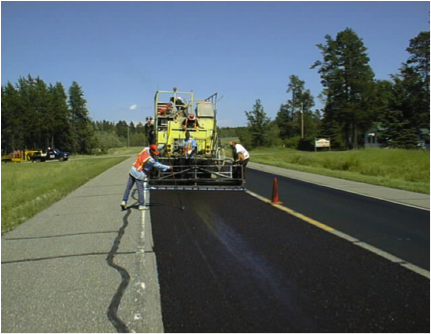 What:  Micro surfacing is a high performance enhanced slurry seal composed of a mixture of polymer modified emulsified asphalt, dense-graded crushed fine aggregate, mineral filler, break control additives and water.  The emulsifiers and additives allow micro surfacing to be placed at thicknesses up to 1.5 inches and the surface to cure in less than an hour. (Slurry seals are applied at the thickness of the largest aggregate, and can take up to 8 hours to cure sufficiently for traffic return.)  Micro surfacing requires a special machine with an attached spreader box with a double strike-off blade design.  The micro surfacing unit can be truck-mounted or self-propelled.  A special rut box is used for filling ruts over ½”.  Micro surfacing is used to fill non-working ruts, to restore skid resistance and as a preventive maintenance treatment for both flexible (asphalt) and rigid (Portland Cement Concrete) pavements.  It is available in two types, determined by the maximum aggregate size.  Type II, with slightly smaller average aggregate size, is used to fill surface voids, address surface distresses, seal, and provide a durable wearing surface on airports and city streets.  Type III, with a larger average aggregate size, provides maximum skid resistance and an improved wearing surface, and is used for heavily traveled highway, collectors and interstates pavements, for rut filling, or for placement on highly textured surfaces requiring larger size aggregate to fill voids.

Where:  Flexible or rigid pavements in good structural condition with loss of friction, non-working ruts, and/or low to medium severity surface distresses such as cracking and raveling.  Any cracks greater than ¼ inch should be sealed prior to micro surfacing.  Micro surfacing is an effective pavement preservation treatment for very high volume roadways where quick traffic return is important.  It has been successfully used on all types of pavements including airports, parking lots, residential streets, city streets and interstates.

advantages):  High quality materials, strict specifications and performance-based design procedures yield a high performance surface that corrects minor surface profile irregularities, fills ruts, cures quickly for traffic return in less than an hour, lasts longer than some other surface treatments such as slurry seals, and can be constructed at night (or cooler temperatures).  It protects the pavement structure from moisture and the surface from further deterioration.  Micro surfacing is a cost-effective alternative to hot mix asphalt overlays for pavement preservation of concrete pavements as well as asphalt pavements.

When:  Micro Surfacing should be applied when the pavement structure is in good condition, but there are minor to moderate surface distresses.

For more information on successful micro surfacing, consult the Micro Surfacing Checklist put together by FP2 Inc. and FHWA.